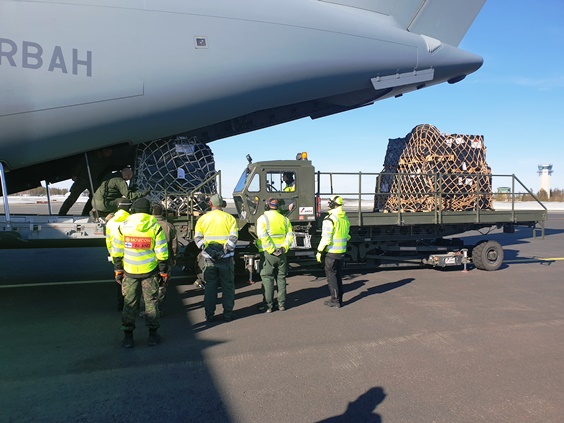 Like many other functions in modern society, the FDF logistics system is networked with the Finnish society and foreign actors as well. Today’s operational environment is such that for being able to operate at home and abroad, the Defence Forces has to cooperate with foreign actors in all states of readiness.

To carry out its task, the Logistics Command has to work with domestic and foreign cooperation partners on a regular basis. The development of the Defence Forces’ capabilities involve making  defence materiel procurements from abroad, and the maintenance and development of the capability of  the materiel in use. This often requires intense and long-term cooperation with the defence administration of the country of manufacture or origin and the industries in the sector.

The activities of the Logistics Command also involve a different kind of international interface: One of the tasks of the Logistics Command involves the planning and execution of the practical arrangements of Defence Forces logistics in Finland and abroad. Transportation of Defence Forces personnel and materiel in connection with crisis management operations and other activities is one aspect where international cooperation is visible. Transportation is conducted in cooperation with international partners, including State and commercial actors.

Since 2017, the Finnish Defence Forces statutory tasks have included an ability to receive military assistance in the form of materiel, troops and sharing of situation picture, for example. In addition, Finland may provide military assistance to a State, the EU or an international organisation. Assistance may be provided or received on the basis of a separate political decision.

Host nation support arrangements are tested and national defence is developed in conjunction with military exercises organised in Finland with the Defence Forces hosting foreign troops.

Host nation logistics support for visiting troops comprises, in practice, largely the same support that is provided by the Defence Forces for its own units to ensure the operating capability of its personnel and systems and the availability of its materiel. Among other things, support provision for visitors may involve entry into the country, transportation and planning of transportation, accommodation, catering, fuel, spare parts, ammunition and health care as well as environmental protection. There is a charge for logistics services provided for exercise activities as per FDF fees.

The Nordic countries conduct cooperation in the logistics and materiel sector in the framework of the Nordic Defence Cooperation (NORDEFCO) as well.  The Nordic Combat Uniform (NCU) project  is an important defence materiel project pursued in the framework of NORDEFCO. The objective of the NCU project is to acquire a common combat uniform  meeting the requirements of the future battlefield for the use of the Finnish, Swedish, Danish and Norwegian armed forces.